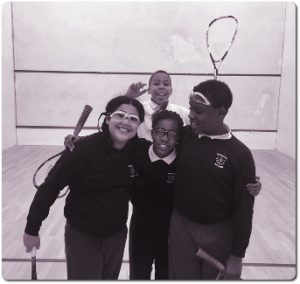 “Squash Squared is dedicated to addressing disadvantage faced by motivated  London youth by using squash and extra curricular academic tutoring to give every individual the same opportunity to enjoy their lives, learn and fulfil their potential “

Founded in 2015 and the first of its kind in the UK, Squash Squared is registered charity which provides selected, deserving primary school children with after-school extra curricular tutoring and introduces them to the sport of squash.

‘URBAN SQUASH’ – AN ESTABLISHED AMERICAN MODEL
Originating in Boston in 2006, the innovation of connecting squash with education as ‘Urban
Squash’ has now produced 17 programmes operating across America, currently supporting 1500 disadvantaged children from 8yr olds through to high school.
The results are impressive, with 97% of them then graduating from high school and going on to college.

NOW THIS SUCCESS IS WORKING IN LONDON

Since 2015 Sacred Heart Primary School in Battersea, have been piloting the UK’s first version of the American Urban Squash model – a Squash & Maths programme – initiating a partnership with South London’s prestigious Wimbledon Club and its squash director Stacey Ross.
The programme involved a group of up to 25 pupils being escorted to the Club twice a week after school. They were then split into two simultaneously operating sessions: one group
learning/playing squash, while the others did maths.
After an hour they would swap over.

Check this film about them made by Sandra Munoz for Keepsake Videos, a local filmmaker

We are pleased to announce that the nominations for the 2019 Active Wandsworth Awards for Sport & Physical Activity are open.

The Active Wandsworth Awards are open for the whole community to nominate across 10 categories until Monday 26 January 2020. The Active Wandsworth Awards recognises the commitment and achievement of the many people involved in sport and physical activity within Wandsworth. The awards reward talented local sports performers, coaches, volunteers, schools, organisations and clubs for their exceptional achievements in 2019.

Nomination Categories
Anyone can nominate across the 10 Award categories to showcase what makes Wandsworth such an active and successful Borough. The 10 categories include:

Nominations are open now up until Sunday 26 January 2020. Shortlisted nominations will be invited to the Active Wandsworth Awards on Friday 28 February at Wandsworth Civic Suite.

Please contact [email protected] or call if 0203 9590030 if you have any questions about the nomination process. Please also feel free to circulate to your contacts, members and databases to help spread the word event further.

Take this survey powered by surveymonkey.com. Create your own surveys for free.

Please share with any 13-25 who love to dance. Rehearsal will start tomorrow at Providence House Youth Club.

When this happens, it's usually because the owner only shared it with a small group of people, changed who can see it or it's been deleted.

Aaron enjoys an opportunity to dance along to Christmas tunes alongside our very own Battersea Belles dance group!

The first ever Dyslexia Road show for parents in Wandsworth and Lambeth. Sat 8th February 2020, details on flyer.
Come along and hear your legal rights to support your child in school.

Book for your free tickets