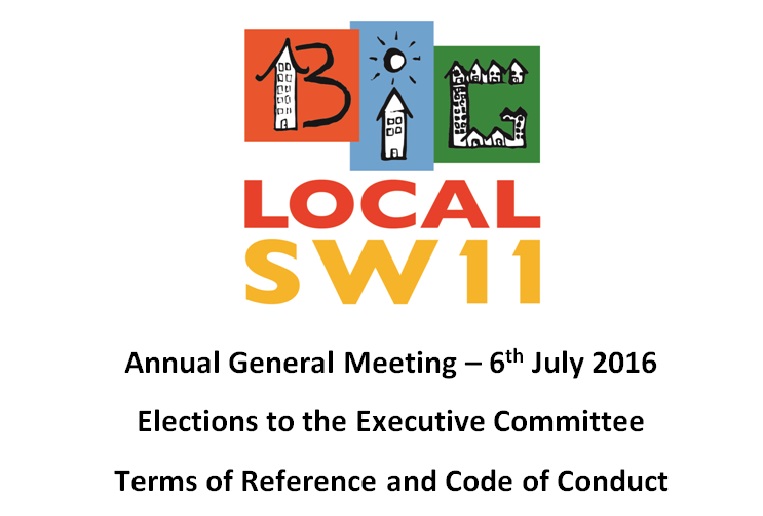 The present Partnership Executive Committee was elected at the 26 June 2014 AGM for a 2-year period.   This election took place after an interim management group, the Core Planning Group, successfully took Big Local SW11 into a format required by Local Trust.

This Core Planning Group completed the Getting Started stage and agreed all the documentation and took us onto the next stage the formation of the current Partnership Executive Committee.  This Committee will be responsible to overseeing the Big Local Plan which include spending of the £1 million awarded by Local Trust as part of the Big Lottery fund.

This Executive Committee consists of 12 members and 3 co-opted, non-voting, members on a volunteer basis.  Of these 12 members, 6 are residents; 4 are full time employed/volunteers and the other 2 are local elected councillors from 2 major political parties from the 2 Wards that form the designed region. One of the full time volunteers also represents the Local Trusted Organisation.  Of the 3 co-opted members 2 are resident and the other an employee of a local charitable youth organisation.  This combination meets Local Trust requirement of the membership of the group to be at least 51% resident led.

We are proposing the same number be appointed to the new Partnership but for the period of the Partnership to run for 3 years rather than the originally proposed 2.  We also agreed that we would change the name of the Executive Committee to Partnership Committee.
We agreed at our Partnership Executive Committee of 8 June that in order to have some continuity that the position of Secretary/Administrator will not be up for election at this stage.

The Local Trusted Organisation also will also have a position on the Executive Committee.
.
The new Partnership Committee will consist of the following main positions:

With the exception of the Secretary/Administrator all positions will be filled at the 1st meeting after the formation of the new Partnership Committee.

The new committee will have the powers to appoint any other positions deemed appropriate by the Partnership Committee.

The Local Trusted Organisation has contracted with a Support Co-ordinator to support the Executive and it is planned that they will also contract with a Communications Support Worker.

Election to the Committee

The current Partnership has approved, at their meeting on 6 June 2016, the process for the election.

Who are we looking for?
Big Local SW11 is looking for local residents and workers in the Big Local SW11 area who are independent minded, with a variety of skills and experience to offer, with a vision for this area and keen to work alongside a range of different people and organisations.
The commitment is to a minimum of 4 Partnership Committee Meetings and 2 General Meetings a year, and a willingness to serve on sub committees as needed.

You may nominate someone, but please ask the person’s permissions before doing so; or you may volunteer yourself to the partnership Committee.

All nominations to be sent to [email protected]

The deadline for receipt of nominations is 5 pm on Tuesday 5 July.